New radiotherapy techniques allow treating the tumour precisely. In radiotherapy two main streams are there one is External beam therapy and another one is Brachytherapy.

In external beam therapy in turn has different techniques they are,

Indeed, Brachy therapy also has its own different techniques they are,

In all these cases, owing to the short treatment distance, the geometry of source distribution is critical.

3DCRT is the superior technique to the conventional radiotherapy, in conventional radiotherapy sparing of normal tissues difficult task and sometimes not possible also.  After the introduction of 3DCRT it make us to conform the irregular shape of the tumor with help of Multilevel collimators, customized etc. Indeed, helped to spare the normal tissues in many cases. For doing this technique we should require three dimensional information of anatomy with good treatment planning system.

IMRT is a technique which uses linear accelerators to deliver conformal radiation – radiation which is sculpted to the shape of the tumour.  IMRT utilises the multi-leaf collimators on a linear accelerator to vary the radiation beam intensity around a target field. The shape of the radiation beams may change hundreds of times during the course of treatment. The intensity of the beams and the direction from which they are delivered also varies. The result is radiation distributed in three dimensions around the tumour, minimizing radiation dose to normal tissue.

In IGRT, machines that deliver radiation, such as a Linac (for x-ray or photon) or cyclotron/synchrotron (for proton), are equipped with imaging technology so that the physician can image the tumour immediately before or even during the time radiation is delivered, while the patient is positioned on the treatment table. Using specialized computer software, these images are then compared to the images taken during simulation. Any necessary adjustments are then made to the patient's position and/or radiation beams in order to more precisely target radiation at the tumour and avoid healthy surrounding tissue.

IGRT is used to treat tumours in areas of the body that are prone to movement, such as the lungs (affected by breathing), liver, and prostate gland, as well tumours located close to critical organs and tissues. It is often used in conjunction with intensity-modulated radiation therapy (IMRT), proton beam therapy, stereotactic radiosurgery, or stereotactic body radiotherapy (SBRT), which are advanced modes of high-precision radiotherapy that utilize computer-controlled x-ray accelerators to deliver precise radiation doses to a malignant tumour or specific areas within the tumour

RapidArc or VMAT is a volumetric arc therapy that delivers a precisely sculpted 3D dose distribution with a single 360-degree rotation of the linear accelerator gantry. It is made possible by a treatment planning algorithm that simultaneously changes three parameters during treatment:

1. 3DCRT is the conformal radiation therapy is it true or false?

3. Advantages of IGRT are,

The demands of modern radiotherapy planning are quite different from those 20 years ago. Clinicians now require to define the target volume more precisely, not just in two dimensions, but also in three dimensions. It has therefore become necessary to visualize anatomy in three dimensions to enable planning to conform the dose around the target volume in order to irradiate the tumour to as high a dose as possible, and saving the normal tissues. In order to achieve this, the following tools are necessary:

Export of digitally reconstructed radiographs, (DDRs — see below) to an image database for on-line assessment of treatment accuracy.

An exciting development in the area of simulation is that of converting a CT scanner into a simulator (figure (a)). CT simulation uses a CT scanner to localize the treatment fields on the basis of the patient's CT scans. A computer program, specifically written for simulation, automatically positions the patient couch and the laser cross-hairs to define the scans and the treatment fields. The software (as part of CT scanner or a stand-alone treatment-planning system) provides outlining of external contours, target volumes and critical structures, interactive portal displays and placement, review of multiple treatment plans, and a display of isodose distribution. This process is known as virtual simulation. 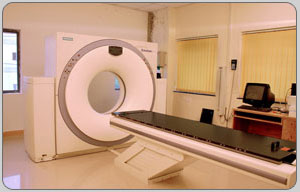 Above figure shows picture of the CT Simulator.

The nomenclature of virtual simulation arises out of the fact that both the patient and the treatment machine are virtual—the patient is represented by CT images and the treatment machine is modeled by its beam geometry and expected dose distribution. The simulation film in this case is a reconstructed image called the DRR (digitally reconstructed radiograph), which has the appearance of a standard 2-D simulation radiograph but is actually generated from CT scan data by mapping average CT values computed along ray lines drawn from a “virtual source” of radiation to the location of a “virtual film.” DRR is essentially a calculated (i.e., computer-generated) port film that serves as a simulation film. The quality of the anatomic image is not as good as the simulation radiograph but it contains additional useful information such as the outlined target area, critical structures, and beam aperture defined by blocks or MLC.  A DRR can substitute for a simulator radiograph by itself but it is always preferable to obtain final verification by comparing it with a radiographic simulation film.

Different tissues within the body attenuate the beam of X-rays to different levels.

In a complex mixture of elements, which is of course what we are concerned with in the organs of a patient, the degree of attenuation is particularly influenced by the average of the atomic numbers of all the atoms involved.

Where there is a considerable difference between the densities of two organs, such as between the solid muscle of the heart and the air in the lungs, then the outlines of the structures can be visualised on a radiograph because of the natural contrast that exists. Similarly, if there is a difference between the average atomic numbers of two tissues, such as between soft tissues, which are composed of elements of low atomic number, and bone, which is partly composed of the element calcium, with a rather higher atomic number, then the outlines of the different structures can be seen by natural contrast.

Above figure shows the radiograph taken with the help of contrast

However, if the two organs have similar densities and similar average atomic numbers, then it is not possible to distinguish them on a radiograph, because no natural contrast exists. This situation commonly occurs in diagnostic radiography, so that, for example, it is not possible to identify blood vessels within an organ, or to demonstrate the internal structure of the kidney, without artificially altering one of the factors mentioned earlier.

Two of the factors important in organ contrast can be artificially altered, the density of an organ, and, more usefully, the average atomic number of a structure. The density of a hollow organ can be reduced by filling it with gas or air, providing negative contrast. This is mainly of historical significance, but is still used when, for example, gas is introduced into the stomach or colon during a double-contrast barium examination.

1. When compared to soft tissue, bone is clearly visible because of natural contrast (it has high atomic number component)

Treatment prescription is the important document to know about the patient’s disease, area of tumour, diagnosis, which modality has been planned, treatment energy, planned dose, total number of fractions, and number of fractions received and special instructions to follow during the treatment of the particular patient.

The prescription should consists of following information’s,

Name of the Patient:

The correct name of the patient should be written in the prescription. Otherwise it leads to potential effects; this can be avoided b cross checking the patient by asking them to show any other proof of identity (ID).

Diagnosis is the most significant part of the prescription because if there is any mistake in writing the diagnosis or if wrongly detected the entire treatment will get continue with false treatment methods. In this regard particular attention should be given during the process. To avoid this doctor recommended doing this part.

Treatment site or region needs to be mentioned in the chart for every patient for accurate setup and also to avoid the confusions. Its advised to mention with diagrams are useful for radiation technologist for precise delivery.

Treatment modality is crucial one to mention in the prescription. For example if, the patient is chosen for 3DCRT radical treatment at one phase (but it is not mentioned) after, a long period of gap same patient comes with recurrence and meet another doctor means the situation leads to difficulty in treating the patient. That’s why it should be mentioned in the prescription chart irrespective of the treatment.

Planned dose and fraction for each and every tumour may vary. Dose and fractions needs to mention in the prescription chart by the doctor to find the patient’s total dose received by the treatment. In addition to that the fractional dose shall be mentioned for accurate calculation of treatment time. Sometimes the total doses will be delivered in different fractional dose if, it so special attention should be given to that case during calculation and also in reviewing the patient.

Special instructions if any present in the patient’ treatment, could be mentioned clearly in the chart. For example wedges, blocks, position of the patient for the particular treatment (Supine or Prone position etc).

1. Pick out the correct one, Prescription should include,

Dose calculation is a significant step in treating the patient. If, dose calculation failed to do correctly whatever may be the accurate step and other features will go in ineffective. For that the medical physicist or dosimetrist, who are in the place to calculate the dose for the treatment should be precise without any approximation to maintain the quality of radiotherapy.

The formula to calculate the dose per fraction is as follows,

Dose verification in external beam radiotherapy and brachy therapy has been done by following methods:

Sensitivity of film depends on the size of emulsion grains (crystals of silver bromide) and the quality and type of radiation.

Slow-speed films (small grain size) such as Kodak XV-2 and Kodak RPM-2 are suitable for relative dosimetry provided their sensitometric curve (also known as H-D curve) is predetermined in comparison with a calibrated ion chamber. Processing conditions must be standardized. Any air pockets between film and its jacket must be eliminated to avoid artifacts.

Film is well suited for relative dosimetry of electron beams (shows practically no energy dependence). In photon beams, however, it shows significant energy dependence and therefore it is used mostly for portal imaging and quality assurance procedures such as checking beam alignment, isocentric accuracy, and beam flatness. For measuring dose distributions, photon energy dependence must be taken into account.

1. Dose verification in the radio graphic film will be calculated on the basis of,

2. Solid state detectors are useful in in vivo Dosimetry?