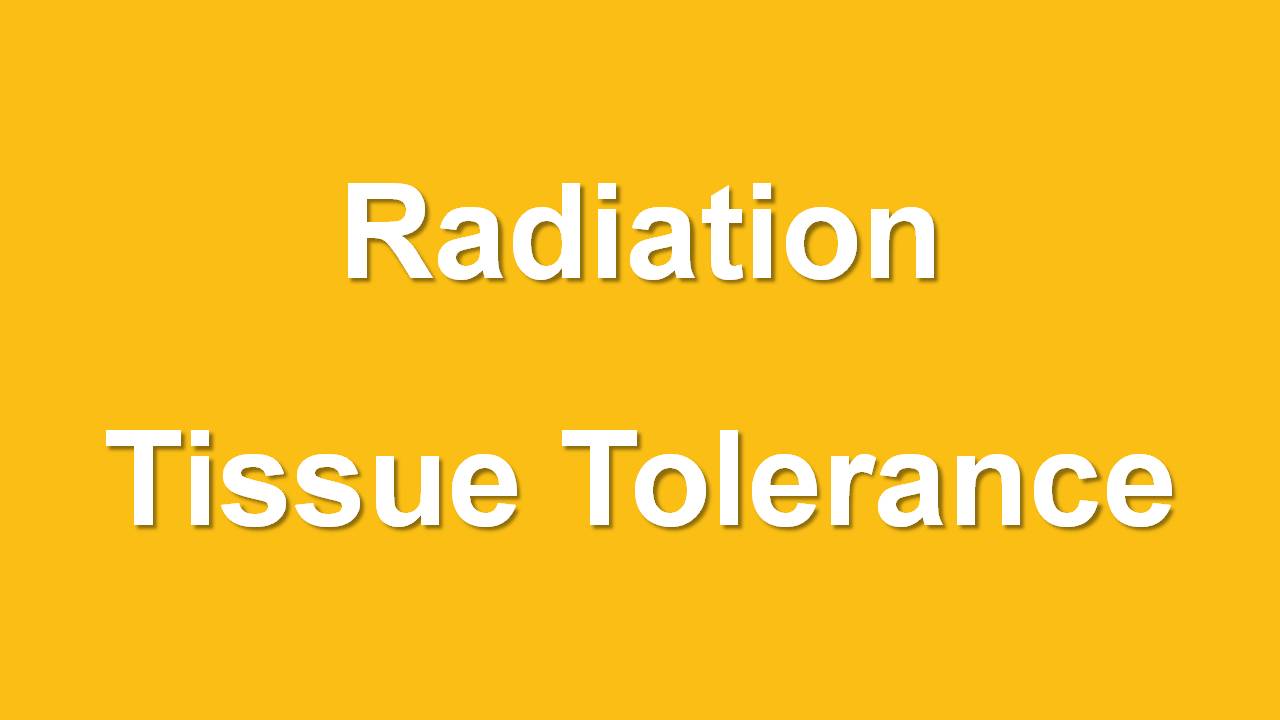 Tissue tolerance refers to the body’s ability to tolerate radiation exposure without adverse effects. Adverse effects refer to the radiation dose a specific body organ (like the lungs) can receive before it fails. Dose tolerance values in tissue tolerance tables usually apply to conventional fractionation for both photon as well as electron external beam radiation therapy treatments.

The serial or parallel nature of an organ also impact the organs’ ability to tolerate radiation exposure. A parallel organ only fails completely when the entirety of the organ is irradiated. Examples of parallel organs are the lungs and kidneys. In contrast, a serial organ fails completely when only a portion of it volume is irradiated. Examples of serial organs are the spinal cord and lens of the eye.

Organ volume effects means an organs’ ability to tolerate a radiation dose depends on if the whole organ or a portion of the organ receives a radiation exposure. A portion of parallel organ (like the lung) may be irradiated and fail while other parts of the lungs not exposed to radiation continue to function. In contrast, if a portion of serial organ (like the spinal cord) is irradiated while other parts of the spinal cord are not exposed the entire organ fails to function.

Over time, our understanding of tissue tolerance has evolved and new terms have emerged. The objectives of radiation therapy to effectively treat cancer while preserving normal tissue remains the same.  Adverse effects have been better described as organ toxicity. Organ toxicity refers to the specific degrees to which radiation has damaged a tissue.

The term normal tissue complication probability (referred to as NTCP) better describes the relationship between radiation exposure to tissue toxicity. NTCP accounts for volume effects as well as the serial and/or parallel nature of organs.

The term tumor control probability (referred to as TCP) is defined as the probability that a prescribed dose of radiation therapy controls or eradicated a tumor. The prescribed dose is specified in terms of total dose, treatment days (or fractions), as well as the daily dose.

The term generalized equivalent uniform dose (referred to as GEUD) is a dose term that better describes organ volume effects. The GUED terms allows the conversion of a partial organ volume irradiation exposure to an equivalent dose had the entire organ received radiation. The GUED term is useful for dose-volume toxicity determination.

Fourteen; 14 questions out of the 55 questions in the Clinical Concepts in Radiation Oncology content area come from the Radiation Tissue Tolerance sub-topic.