The most efficient tend to have certain structural features in common: a free SH group (or potential SH group) at one end of the molecule and a strong basic function, such as amine or guanidine, at the other end, separated by a straight chain of two or three carbon atoms. Sulfhydryl compounds are efficient radio protectors against sparsely ionizing radiations, such as x- or γ -rays.

The mechanisms most implicated in SH-mediated cytoprotection include:

Free-radical scavenging that protects against oxygen-based free-radical generation by ionizing radiations or chemotherapy agents such as alkylating agents. 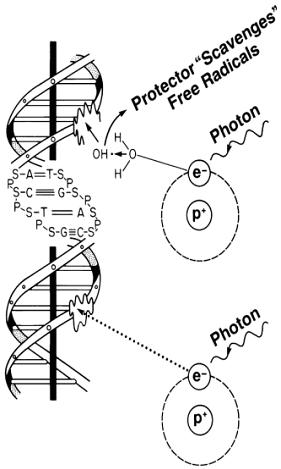 Fig: a Schematic diagram of effect of Radio protectors

Radiosensitizers are chemical or pharmacologic agents that increase the lethal effects of radiation if administered in conjunction with it. Many compounds that modify the radiation response of mammalian cells have been discovered over the years, but most offer no practical gain in radiotherapy because they do not show a differential effect between tumors and normal tissues. There is no point in employing a drug that increases the sensitivity of tumor and normal cells to the same extent.

With this all-important criterion of a differential effect, only two types of sensitizers have found practical use in clinical radiotherapy:

Halogenated pyrimidines sensitize cells to a degree dependent on the amount of the analogue incorporated. In this case, a differential effect is based on the premise that tumor cells cycle faster and therefore incorporate more of the drug than the surrounding normal tissues.

Hypoxic-cell sensitizers increase the radiosensitivity of cells deficient in molecular oxygen but have no effect on normally aerated cells. In this case, a differential effect is based on the premise that hypoxic cells occur only in tumors and not in normal tissues.

These two classes of sensitizers are discussed in turn. The basic strategy of all radiosensitizers . The aim is to move the tumor control curve to lower doses by sensitizing tumor cells but not affecting the normal-tissue complication curve, or at least not altering it as much. The outcome would be to increase the tumor control probability for a given level of normal-tissue complications.

1. Radiobiology for the radiologist by E.J.Hall, Amato J. Giaccia